The most important announcements
7 Interesting Places for a Day Trip from Tabriz by Car
Persian Carpet The Intersection of Iranian Art and History
7 Top Iran mountain climbing destinations
Why you should travel to Kermanshah?
7 Best Local Foods in Rasht You Must Try On Your Trip
Categories
the Most Visited
Top 7 most mysterious places in Iran you can visit by car 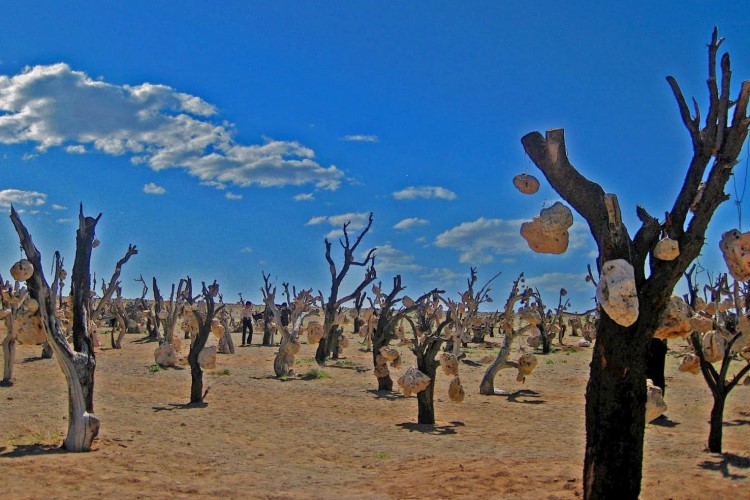 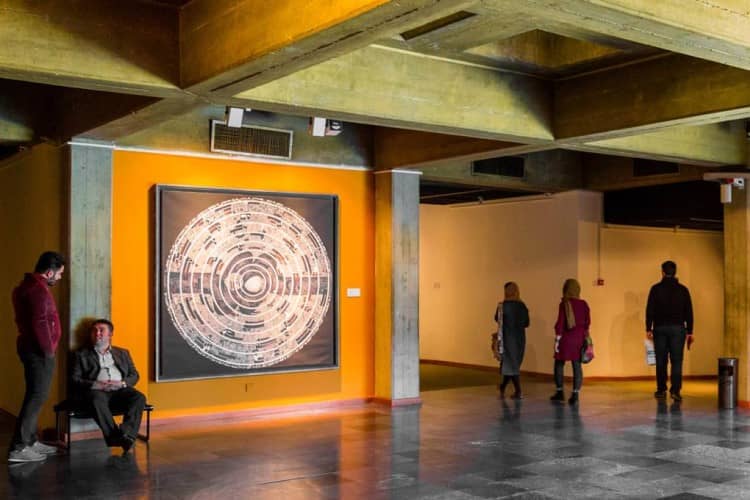 Driving Tips in Iran - Everything You Need to Know 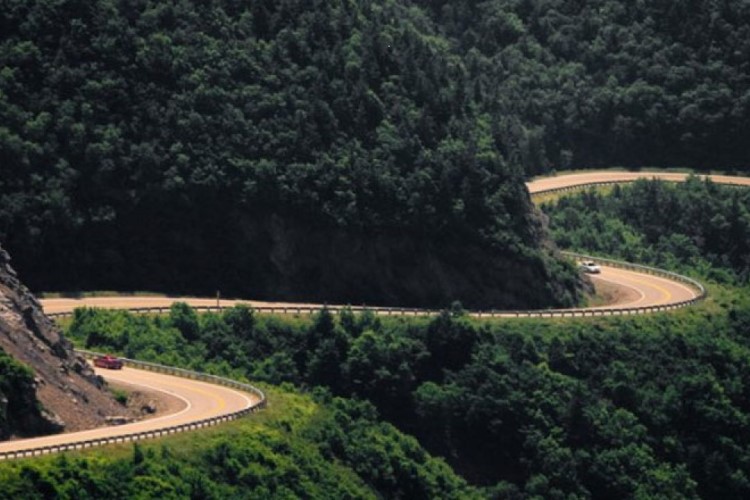 The ultimate guide to road trip from Tehran to Chabahar 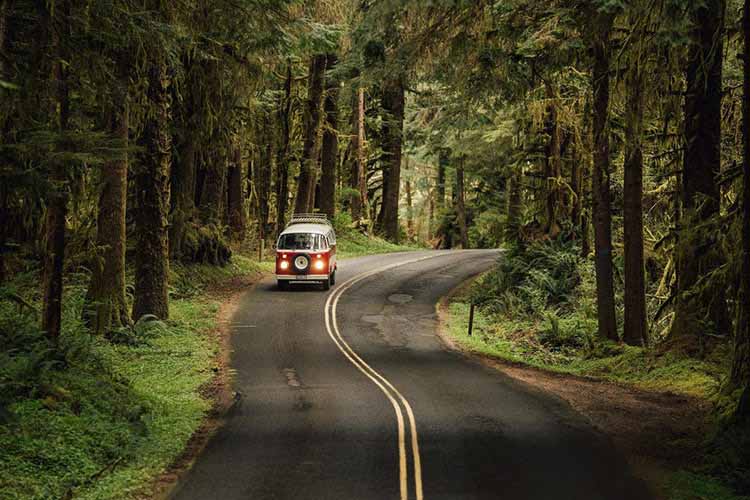 10 Interesting Facts about Persepolis (Takhte Jamshid) That May Surprise You 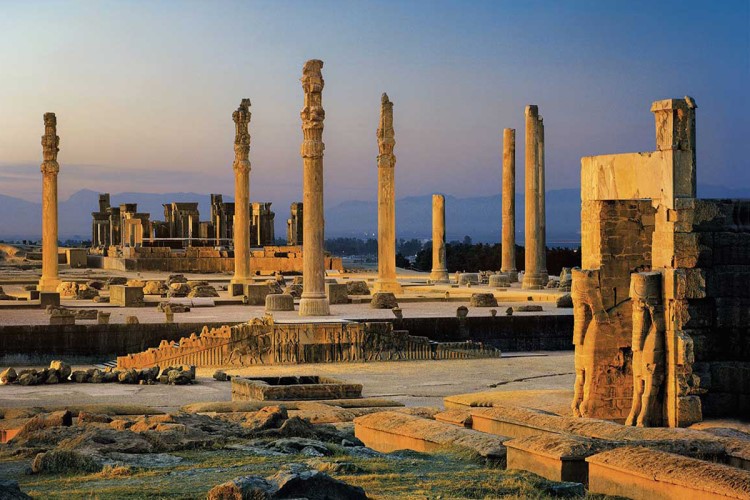 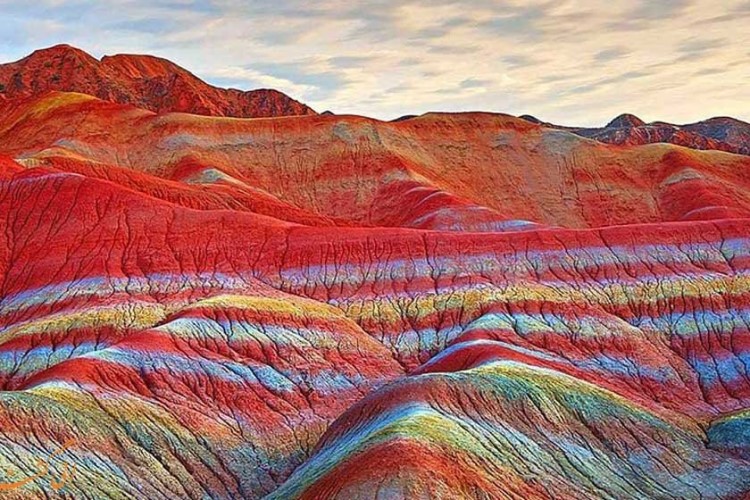 Persian Carpet The Intersection of Iranian Art and History 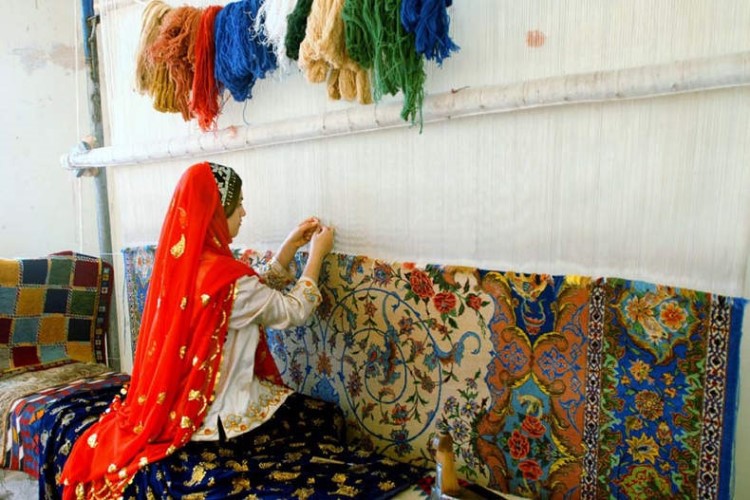 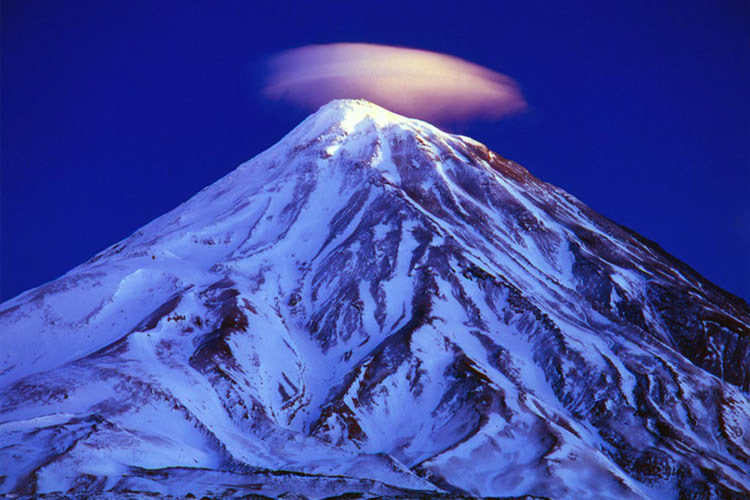 Why you should travel to Kermanshah? 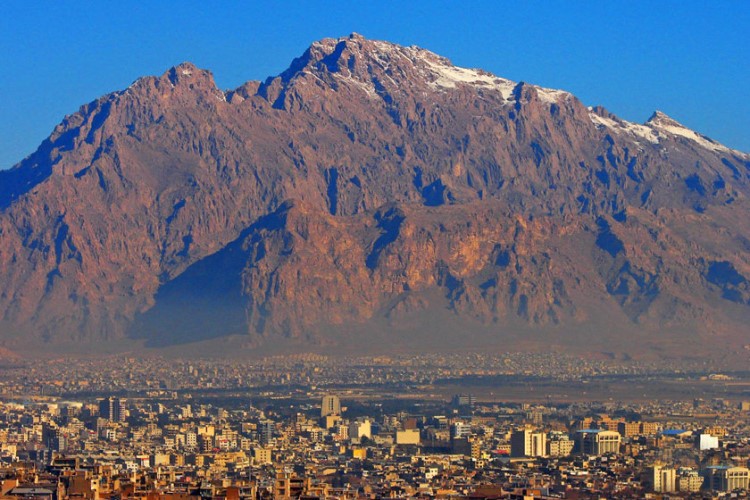 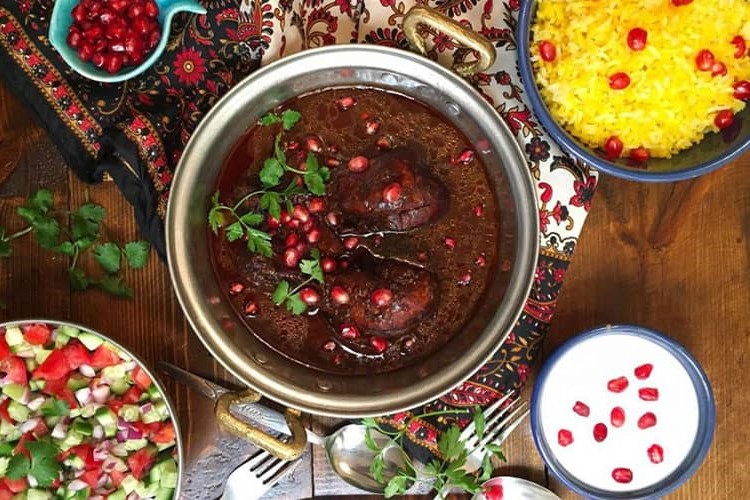 Categories
The Most Visited

Driving Tips in Iran - Everything You Need to Know

The ultimate guide to road trip from Tehran to Chabahar

7 Interesting Places for a Day Trip from Tabriz by Car

Persian Carpet The Intersection of Iranian Art and History

Why you should travel to Kermanshah? 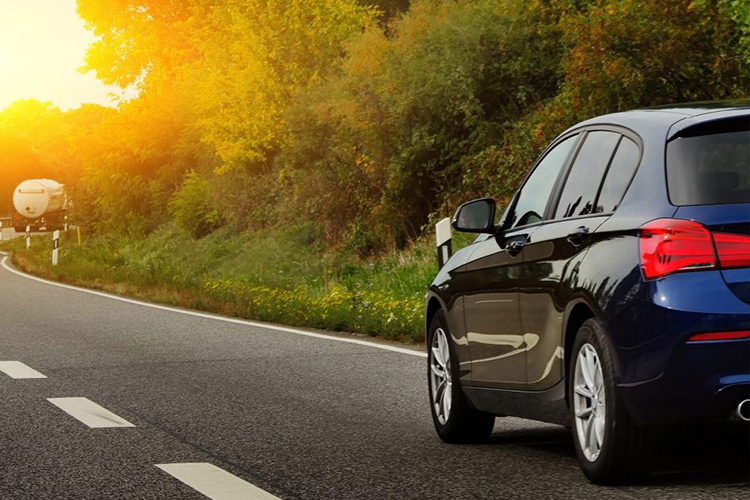 A road trip from Tehran to Bandar Abbas and other southern parts of Iran is a delightful experience for all tourists during the cold season. The weather in Bandar Abbas in the autumn and winter is also warm and pleasant. For this reason, when visiting Hormozgan province, all the tourists coming from Tehran will not only be able to enjoy the fresh air of the Persian Gulf coast but also get away from the hustle and bustle of the capital city.

In Iran, not only is Bandar Abbas considered a recreational and tourist destination, but also a major commercial port. Shahid Rajaei Port is considered one of the most well-known terminals for importing and exporting goods in the country, making Bandar Abbas a commercial hub as well. Thanks to the excellent weather in Hormozgan province in early spring, a road trip from Tehran to Bandar Abbas in Nowruz is among the most popular trips during this time of the year.

But this region is also a favorite place to visit during the other months of the year. This article will give you a dedicated travel guide from Navaran for a road trip from Tehran to Bandar Abbas. In case you are planning to travel to the south of Iran this fall and winter, be sure to stay tuned until the very end of this article from Navaran car rental company! 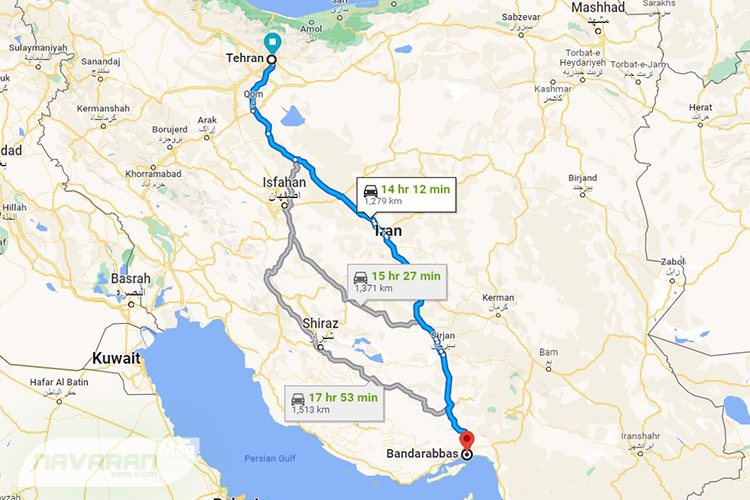 While Tehran is situated in our country's northern half, Bandar Abbas is a harbor in the southernmost part of Iran. So naturally, the travel distance from Tehran to Bandar Abbas is considerably high. Judging from the online maps, the distance between these two cities is approximately 1300 kilometers; therefore, you will need about 15 hours to drive to Bandar Abbas by car. This is, of course,, the time it will take you to cover the distance with no stopovers; in fact, your trip will take longer than this time.

However, it looks likely that you will need to make many stopovers on the road trip from Tehran to Bandar Abbas; as a result, the travel time to the south of Iran by your own car can be expected to be two to three days at best. When traveling to Bandar Abbas and the southern regions of our country for fun, you need to patiently complete this journey to benefit from the natural and historical attractions of the route.

If you are looking for car rental in Tehran before starting your road trip to Bandar Abbas, you can choose Navaran to drive the Bandar Abbas to Tehran distance with a comfortable car and enjoy Iran attraction along the way. Navaran is amongst the most successful companies when it comes to car rental in Iran. 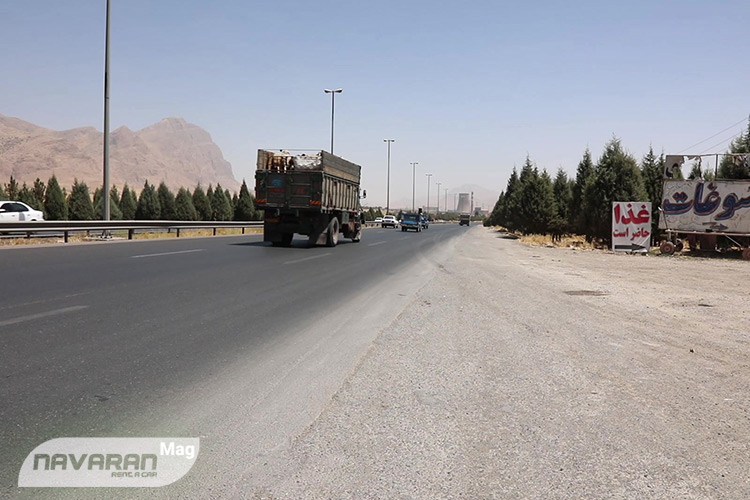 There is one direct route from the north to the south of Iran for your road trip from Tehran to Bandar Abbas. That route includes two famous highways and expressways of the country known as roads 71 and 70. Road 71 refers to the Persian Gulf highway linking Tehran to Kashan and Natanz. Meanwhile, the remaining part of the route to travel to Bandar Abbas by car is Road 71, famous as the "Highway of Asia". The highway connects Bandar Abbas with Yazd and Sirjan.

So, what is the best time of year to drive to Bandar Abbas? Based on the Iran Meteorological Organization's data regarding the average temperature in Bandar Abbas, this city experiences pleasant weather in winter. That is why we can say that the best time to travel to Hormozgan starts from early December until the end of April next year. This is why many tourists consider traveling to Bandar Abbas in the Nowruz holiday season. 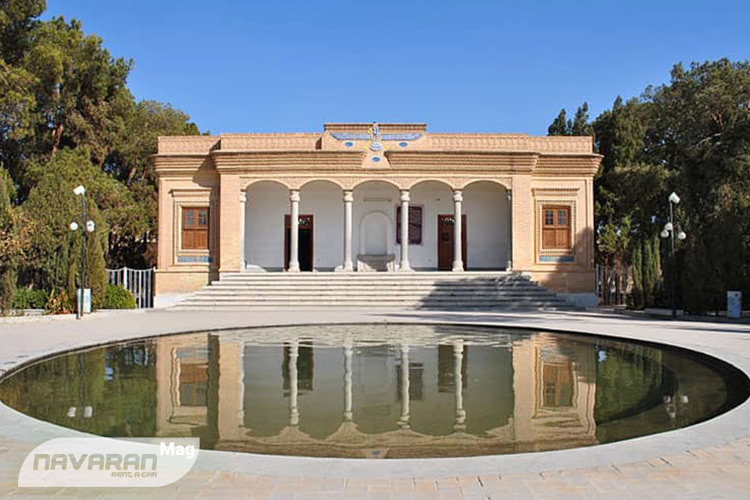 Several major and historic cities are located along the way from Tehran to Bandar Abbas. The cities of Kashan, Naeen, Yazd and Sirjan are likely to attract the attention of travelers on this route. There are several natural and historical sights in each of these cities, which we will cover in more detail.

While exploring the route from Tehran to Bandar Abbas, first, we will visit Kashan city. This region's main historical attraction is the ancient village of Abyaneh, which is situated in the region of Natanz. In addition, there are numerous historical houses in Kashan that travelers will find very attractive. Bagh Fin and Abu Zaid Abad desert represent other tourist attractions in Kashan.

Yazd city is the only provincial capital located on the road trip from Tehran to Bandar Abbas. The Jame Mosque in Yazd, Fire Temple of Yazd, Amirchakhmaq Square and Dowlat Abad Garden are only some of the tourist attractions of this historical city. We recommend not to rush to arrive at Bandar Abbas and spend one or more days in Yazd to visit the historical and tourist attractions of this city.

However, before arriving at Bandar Abbas, you must pass through the city of Sirjan in Kerman province. Sirjan's flat-shaped windmills are the most important historical attraction of this city. There are also various historical sights in the old city of Sirjan, including the Bemid Garden and the Stone Castle. 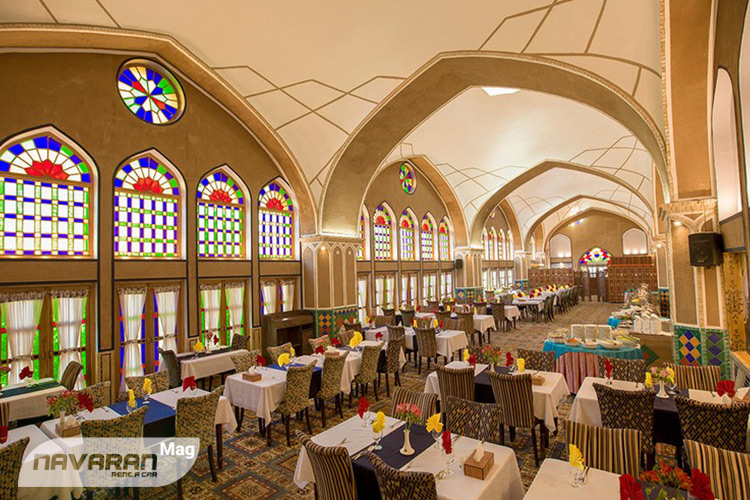 As we stated earlier in the opening of this article, it takes roughly 15 hours to travel to Bandar Abbas by your own car. Clearly, driving this distance all at once in a car is not very logical, so it is necessary to pick one of the cities on the road for a short stop and a break.

If you start your trip quite late in the day, you may have to stop and rest at your first stopover, which is Kashan. There are 41 hotels in this city, each of which you can access through the Hotelyar website. Saraye Ameri Hotel, Saraye Sabaghian Boutique Hotel and Morshedi House are three famous hotels in the city of Kashan.

Moreover, if you are beginning the road trip from Tehran to Bandar Abbas in the early morning, by the end of the day, you will reach Yazd. We recommend spending some time in one of the 63 hotels in this ancient city. Dad Hotel, Bagh Moshir Al Mamalek Hotel and Safaeieh Hotel Yazd are three prestigious and popular places to stay in this historic city.

Sirjan is another city that lies on the way from Tehran to Bandar Abbas. In this small, historic city, you can find two hotels. Jahangardi Sirjan Guest House and Atre Sib Hotel Sirjan are two renowned lodgings in this city. 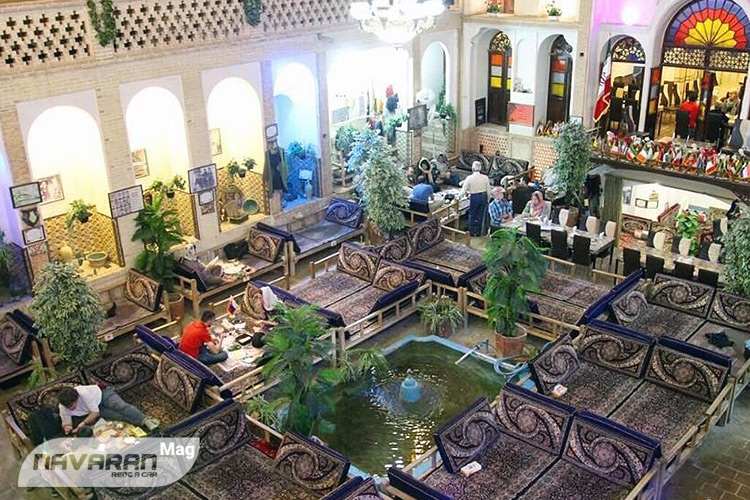 Which restaurants to dine in on the way from Tehran to Bandar Abbas?

You will find numerous restaurants in this city, and there is always something for everyone's taste. Melal Restaurant, Morshidi Restaurant and Mozafari Restaurant are three prestigious dining places in Kashan.

Yazd is the next city on your road trip from Tehran to Bandar Abbas. Considered the largest city on the Tehran to Bandar Abbas route, Yazd also happens to be the only provincial capital along the way. Thus, Yazd has some of the best restaurants for you to choose from. Dragon Italian Restaurant, Gole Sorkh Restaurant and Yazd Talar are some of the best eating places in this city. Nevertheless, if you get a chance to explore Yazd, chances are you will find your favorite restaurant.

When you make a stop in the city of Sirjan, you can find good restaurants there too. Barg Restaurant, Chelcheragh Traditional Restaurant and Cafe and Gandom Cafe all invite you for a short rest and a meal in the beautiful city of Sirjan. 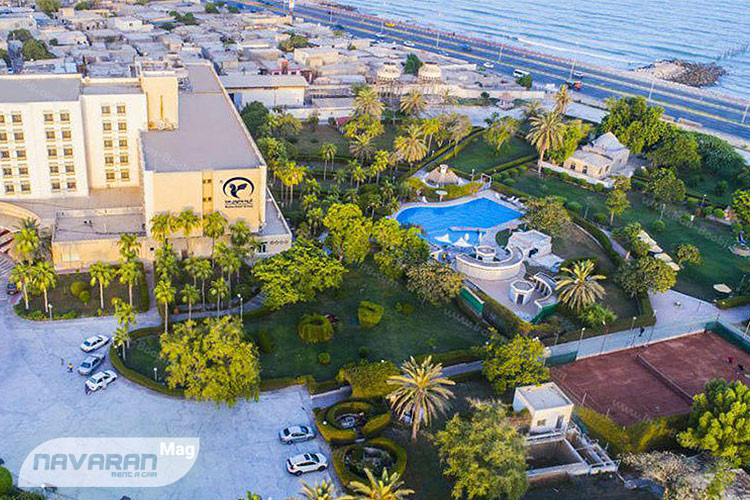 After completing the lengthy road trip from Tehran to Bandar Abbas and arriving at your destination, you will need a place to rest. You can see all the accommodation centers of Bandar Abbas on Hotelyar's website and pick one of them for your stay. There are six hotels available in Bandar Abbas that you can choose from according to your budget and requirements.

Well, we would suggest you choose Homa Hotel in this city for your stay in Bandar Abbas. Being one of the five-star accommodation centers in Bandar Abbas, Homa Hotel also provides car rental services in Bandar Abbas for its guests in partnership with Navaran. When traveling to Bandar Abbas during Nowruz, you can rent a car from Navaran to travel to Qeshm or to Kish by land via this port.

For Bandar Abbas rental car prices and any other information regarding car rental in cities of Iran, feel free to check out our website or application or call our agents. 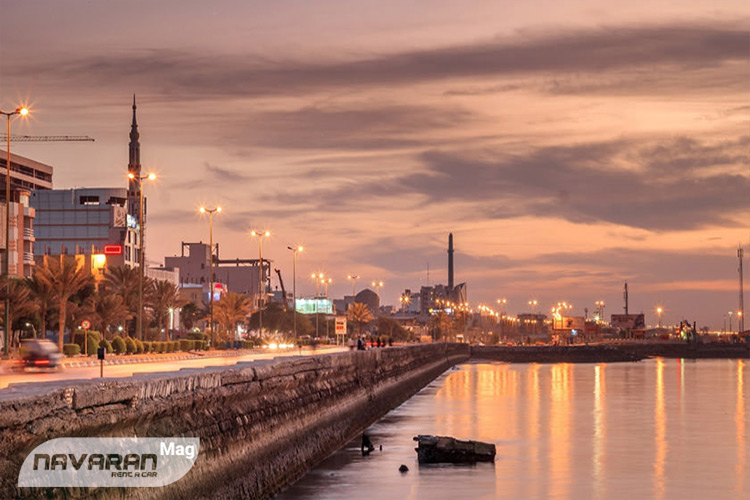 In this article of the Navaran car rental company, we tried to provide you with a very detailed guide for the road trip from Tehran to Bandar Abbas. Getting to Bandar Abbas by car is a perfect and unique experience that will please any traveler. That is why Hormozgan Province hosts thousands of travelers from Tehran and other parts of the country every spring.

Given the significant distance between Tehran and Bandar Abbas, driving on this route for any motorist will be tiring and even boring. However, an alternative way to enjoy the trip to Bandar Abbas is to use public transportation, including passenger flights.

While you are at your destination, you will be able to enjoy the benefits of car rental in Bandar Abbas, provided by Navaran. At Navaran, we can provide our clients with car rental services without needing a bank guarantee. As a result, in many cities in Iran, our clients can rent a car by simply paying a cash deposit.

For your convenience, Navaran company has hundreds of cars in perfect condition and brand new cars in its fleet so that you can easily rent a car in Tehran, rent a car in Isfahan, Shiraz, Mashhad and the majority of cities of Iran through the Navaran website or application. 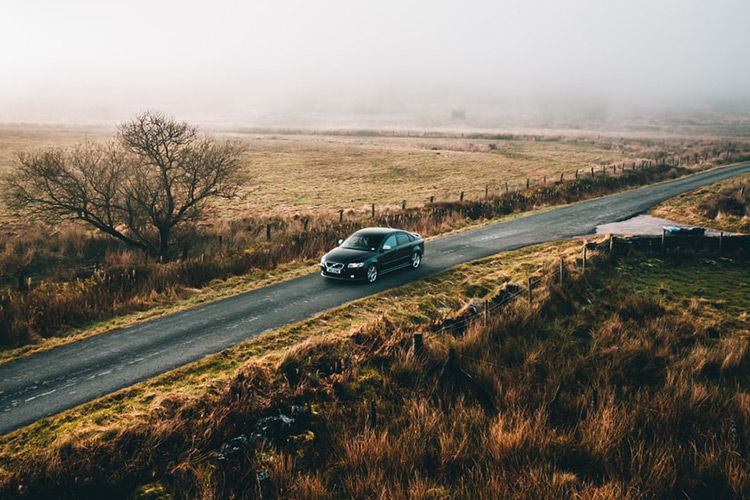 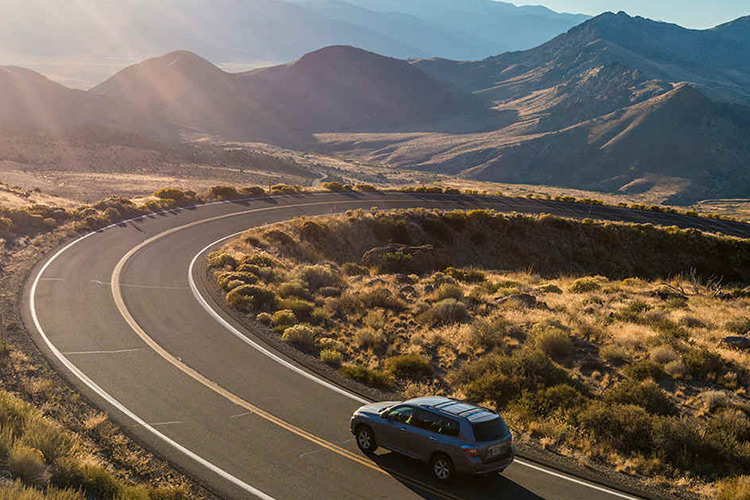